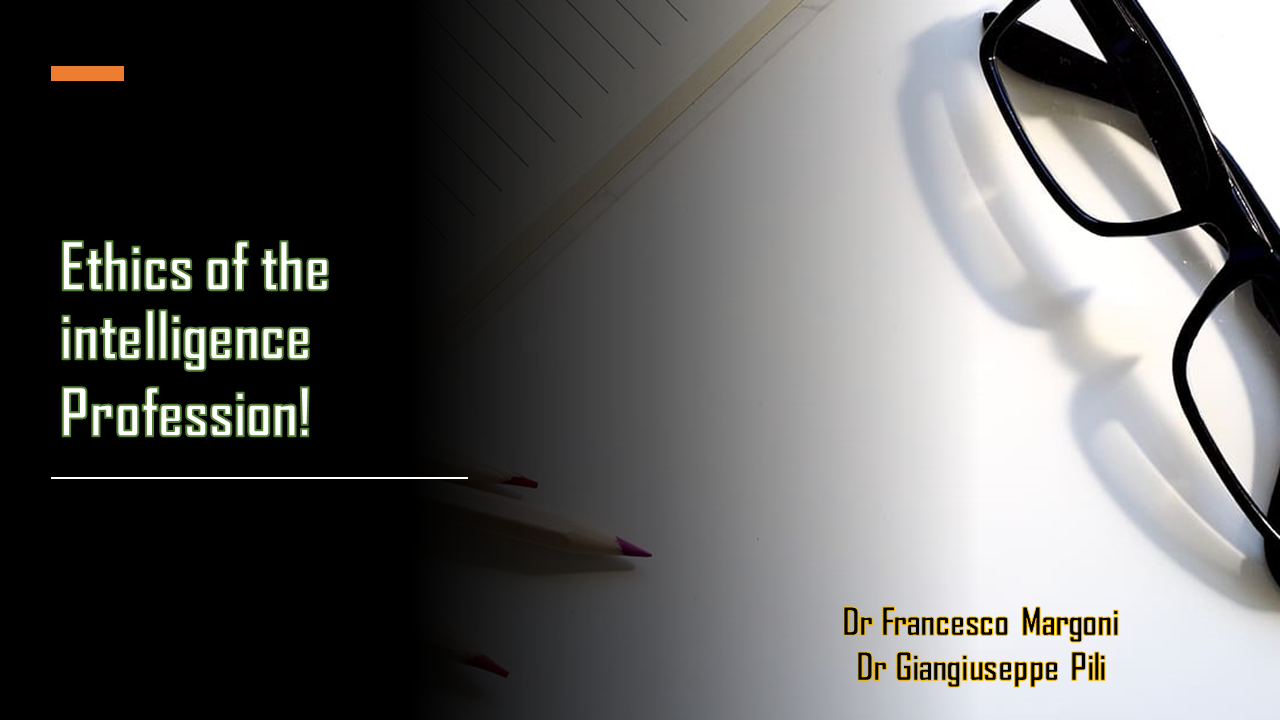 Subtitle – What is the ethical framework of a real intelligence analyst?

Research Question – What is the analysts’ ethical framework in their own view.

Project Roles – Dr Giangiuseppe Pili (Intelligence Scholar & Responsible for the intelligence component of the research), Dr Francesco Margoni (Moral and Developmental Psychologist – Quantitative researcher & Responsible for data acquisition and transparency format). The role distinction is just to give the reader our main division of labor but we are both committed to the joint research in the same degree.

Our mission is to discover how an intelligence analyst frames ethically his/her profession. The current intelligence studies literature does consider ethical dilemmas explicitly – for instance Jan Goldman issued a paper in 2018 in the influential International Journal of Intelligence and Counterintelligence presenting a set of ethical conundrums for the intelligence professionals. Other scholars considered the ethics of intelligence from a normative perspective in order to draw moral evaluation on the intelligence profession. Our goal is quite the opposite and it consists in exploring the question directly from a quantitative perspective asking to volunteering analysts how they themselves would solve those moral conundrums with other related questions we considered relevant to understand their ethical frame more broadly.

We pursue the research through a quantitative analysis based on a questionnaire we planned divided in two parts, ethical dilemmas and important correlated questions.

The questionnaire is already available online at this link: https://unitn.eu.qualtrics.com/jfe/form/SV_06g5A7DnBg3bSqF

The questionnaire is fully anonymous – we do not ask for any kind of identification or email and uncomfortable questions can be skipped (though we still hope that there will not be such reservation, but we understand them where there will be any). The data collected will be used solely and exclusively for the purpose of this study and will never be released in different forms. Responses will be aggregated at a group level and for research purposes only. The project is based only on high-academic research profile, which has only academic interests relevant for the international scientific community.

Steps of the project

The steps identified by the “*” are already done. We are currently at step 3 – collecting the data. The step identified by the “**” is just indicative. We plan to publish three different papers, but the main goals are 6.1 and 6.2, a detailed quantitative analysis on a psychological journal of international relevance and a detailed qualitative analysis on a journal of intelligence studies of international relevance for the intelligence scholarly community.

6 months/1 year to deliver the draft of the paper to be sent to the journals.

We are considering analysts from different backgrounds and part of the public and private sectors. Indeed, even though we think there will be differences between analysts in the private and public sectors, we are searching for the common denominator and we are focusing only on the analysts – not the gatherers or the case officers for instance. Indeed, we aim to investigate moral reasoning in the analyst profession and not in all the intelligence world.

The final outputs will be two different papers – one for a psychology journal to consider and exhaust the quantitative side of the data collected and one for a journal of intelligence devoted to drawing conclusions for the intelligence scientific community.

Giangiuseppe Pili is a former lecturer in intelligence studies in the International Master in Security, Intelligence and Strategic Studies (IMSISS) program at Dublin City University. He earned a PhD in philosophy and sciences of the mind and wrote his thesis on individual and social epistemology. He is part of the organizational committee of the Intelligence Lab at Calabria University. He issued a monograph on the philosophy of war. He is a coauthor of the forthcoming book Intelligence studies with professor Mario Caligiuri. He is the Co-founder and Coordinator of the philosophical association “Philosophical Action” (Azione Filosofica).

Francesco Margoni is a post-doctoral fellow at the Department of Psychology and Cognitive Sciences, University of Trento. He holds a PhD in Developmental Psychology, and he is currently doing experimental research in cognitive, moral and developmental psychology. Of particular relevance, he has published a 2018 paper in PNAS reporting that very young children can distinguish between a fear-based social power and a respect-based social power (“Infants distinguish between leaders and bullies”). He is now continuing this line of research on the origins and development of the notion of authority.